Back in August I decided to try my hand at indoor worm farming once again (i.e. raising worms to be sold – not to be confused with my usual indoor vermicomposting activities). As WFA members (who have been through some of the early Modern Worm Farming Videos) may recall, back when I first started my “real world” worm business, it didn’t take me long to realize that my plans to raise heaps of juicy worms in my basement were naive at best.

For one thing, I hadn’t yet come up with my “Red Worm Culture” and “Compost Ecosystem” concepts for selling worms – so it was basically necessary to pull “pounds of worms” from my indoor bins. I also just didn’t even have a real clue about how to keep a bunch of worms in a bin (let alone how to breed LOTS more). My shallow tubs (now used for my “Turbo Light Harvesting” method”) also weren’t the best choice as containers, largely because I couldn’t get very many of them on the heavy duty shelving unit I had set up for the task (only one per shelf).

In the end I gave up on the idea, and started working with a large-scale grower in my region who supplied me with worms to sell. I also started putting all my focus on outdoor systems. My big shelving unit then basically became my shipping supplies storage system!
😆

Fast forward to this year – I ended up thinking about the stacking shelf approach again for a couple of reasons. For starters, I learned about (WFA member) Larry “The Garbage Guru” Duke’s shelving system he called “The Wall of Flame” (still curious how he came up with the name – lol). It is certainly more ingenious than a basic shelving unit with bins on the shelves – more like a custom-built tub rack that holds the tubs like drawers – but it was the overall idea of space-efficient vertical storage, combined with a systematic set-up and harvesting approach that really appealed to me. The other influence this year was a particularly hot, dry summer which really took a toll on my outdoor beds, making it much more difficult to easily collect sufficient worms for orders. As it turned out, I decided to shut down the “real world” biz for a month or more simply because it wasn’t worth the effort (thankfully, the first couple of years of my business taught me the incredible importance of putting a value on my time). It made more sense to shift my focus to other projects.

Anyway, I thought it would be fun to set up some open Rubbermaid tub systems using aged horse manure, shredded cardboard and coffee grounds (with a small amount of rock dust for good measure), stock them with some worms and wormy material from my outdoor beds, and see what would happen. I decided to test out two different bin sizes – both with upper dimension of ~ 21″ x 15″, but one with a depth of ~ 8.5″, the other one ~ 12″. In theory, the deeper bins would allow me to hold a greater total volume of material in each bin, and thus potentially be able to maintain a larger supply of worms – but the question was whether or not this would actually be the case (still yet to be determined). At the time I was thinking that this could end up being a great way to ensure that I’d have plenty of worms for the fall (when orders tend to increase somewhat) – and maybe even enough worms to warrant staying “open for business” during the cold winter months.

Getting back to our regularly schedule programming…

Unfortunately, I didn’t end up writing down my mix ratios for the various materials being added – but needless to say, the mix contained mostly aged horse manure (and really, that’s likely ALL you would need! I just thought it might be fun to add in some other stuff as well). I added quite a bit of shredded corrugated cardboard, and relatively small amounts of coffee grounds and rock dust. Everything was soaked and mixed really well in a big tub before being added to the various bins 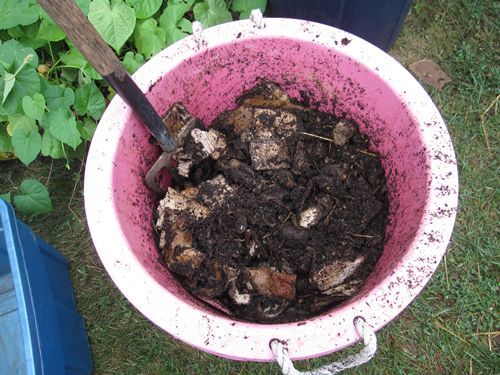 My original plan had been to stagger the set-up of various bins somewhat, so I would end up a reasonably stable (ongoing) supply of worms. For anyone planning to get serious with an approach like this, I definitely recommend doing so (staggering). As it turned out, I ended up setting up most of them all at once (for the sake of saving time, and also so I would have lots of worms available by early fall). The combination of a wet August – which helped my outdoor beds to bounce back – and a shift in my focus (to important online projects) resulted in me not bothering to set up any more of these bins, or do too much fiddling with the ones already set up.

Still, I’m really glad I decided to test out this approach since it makes me realize it likely wouldn’t take too much time and effort to get a set of these systems up and running, and to keep them working effectively. Even if I don’t end up staying open for the winter, I have little doubt that this indoor supply of worms will come in handy for late fall and early spring orders, when I more than likely won’t really feel like trudging outside to round up worms.

It’s important to mention that these systems – the way I’ve set them up and maintained them – are much better suited for “worm mix” types of products than “pounds of worms”. I seem to have lots and lots of smaller worms and cocoons (perhaps due to the fact that these bins tend to be somewhat dry). Works great for me – but some of you may want to tweak the systems so as to grow a good supply of bigger worms.

I definitely plan to continue experimenting with these bins in coming months. I’d like to try adding poultry feed and coffee grounds in an effort to boost the available nutrition – perhaps I will compare this approach to only adding coffee grounds and more cardboard (or just cardboard). I also want to see how the deeper systems compare to the shallower systems in terms of the quantity of worms they contain.

Anyway – should be fun! I’ll make sure to keep everyone posted!
8)