Those who have followed along through my various “worm business” writings, videos etc – especially WFA members – will probably know that I’ve put a lot of emphasis on selling primarily worms, and just generally trying to stick with an overall K.I.S.S. philosophy. One of the early Modern Worm Farming videos even explains why I’ve chosen NOT to sell worm castings.

Yes, that should indeed imply that I am now selling worm castings (or “vermicompost”, as I often refer to this material) via my small “real world” vermicomposting business – and it’s all thanks to what I might refer to as a “strategic partnership” with a large-scale worm farmer in my region.

Let’s start by taking a look at WHY exactly I’ve been resisting the urge to sell castings up until now.

1) Generally speaking, if you really want to get into castings biz in any sort of serious way you’ll more than likely need to spend some money – potentially a lot of money – in order to get things rolling effectively. You’ll certainly have a greater chance of success if you also have a decent amount of space. Bottom-line, it’s not really in line with the “small scale”, “fun” business approach I’ve been taking with my “real world” vermicomposting business, and not ideally suited for my “suburban worm farm”.

2) Worm growing and serious castings production don’t necessarily work well together. The beds that work best for breeding loads of juicy worms aren’t necessarily going to be the same beds that help you produce the finest quality of castings in the world. It’s also important to remember that if you are constantly removing your worms so they can be sold, this may end up slowing down your castings production somewhat. Some worm farmers, such as my friend Jack Chambers from Sonoma Valley Worm Farm, don’t seem to have any trouble excelling at both – but again, I live in the suburbs and have been aiming to keep things as simple a fun as possible.

3) This isn’t an ideal product to ship given how much it can weigh, so effective promotion would generally involve more effort to spread the word in my own region. In line with my overall K.I.S.S. philosophy, I actually haven’t really done any significant local promotion of my business thus far (believe it or not!) – the vast majority of my Canadian customers simply find me via my small business website (and a few via the Red Worm Composting website).

So what exactly led me to change my take on the castings-selling situation?

For starters, back at the beginning of June I met with an agro-mineral specialist and became intrigued with the idea of augmenting castings and castings teas with rock dusts, and other amendments. I also remembered that my large-scale worm farming friend (who was actually my “worm supplier” when I first started out) had a decent supply of castings available. Lastly, I just figured it would – bare minimum – be a fun experiment to try out!

The beauty of the castings biz is that if you can get it “right” – i.e. produce/obtain some good quality castings, and find a market for them – it can potentially end up becoming a great source of revenue. What’s nice about it in comparison to selling worms is that you can get lots of bags ready for sale without worrying about a very limited “shelf life” (I certainly don’t keep bags of worms sitting around – all my worms are harvested once the orders come in). There is also much greater potential for repeat business (assuming you get it “right”, and customers are impressed with the product, of course).

As is the case with selling worms, though -when you are purchasing castings wholesale and reselling, you definitely need to keep a very close eye on your numbers. Make sure you tally all your expenses so you know exactly what your cost per bag (or whatever type of container you are selling them in) is before you decide on your pricing. 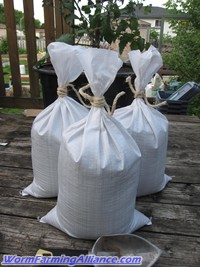 Initially, a lot of my focus will be on getting my castings mix in the hands of customers, and doing a lot of testing with the material myself. As such, my aim is to break even, or perhaps make a small profit with my first cubic yard of material. I wasn’t originally going to put any real effort into packaging – I was simply going to sell the material in old poly-fiber feed bags (hoping I’d be able to track a bunch more of them, since my own supply of these bags is fairly limited).

After giving it some more thought, though, I decided to purchase some bags (similar type of bag but smaller in size) – not only so I could offer customers a clean, consistent “look”, but also for the sake of saving myself a fair amount of time and frustration attempting to track down a free source of used bags. I am already REALLY glad I did!

Where things go from here has yet to be determined! I’m happy to report that I’ve sold 12 bags (to a single customer) already – and my order page isn’t even up yet, nor have I done any sort of promotion.

I’ll be sure to keep everyone posted!
8)

Christy Christie in the News!